I had the privilege to enjoy the ACO concert last night a Hamer Hall. How spectacular.  Always a rejuvenating treat, the ensemble was in full form. One of our party said the previous subscription concert had been terribly disappointing with the musicians seeming quite out of kilter. She sent them a note, and although she didn’t receive a response I suggested that perhaps it had been read out in rehearsal, for tonight was quite the opposite and she agreed. (I can’t imagine the ACO delivering a disappointing performance, but we do all indeed have our off days).

The Gordon Kerry premier work ‘So Dream Thy Sails’ was played superbly and interwove thin tones on the strings with virtuosic playing and full ensemble sections, reflecting the moods and movement of the ocean. A particular highlight was the prominence of the harp, which brought colour, tremendous tonal chiaroscuro and such a beautiful contrast of texture to the work. The concentration was sharp and the performance excellent.

Alan Davies was relaxed and in fine form at Hamer Hall last night.   Sharp observations and reflections on current day to day life as a father of young children were mixed with reminiscences of his own childhood.  His relationship with his detailed-minded father (who raised three children after the death of his wife to leukaemia) was grand fodder for comic material.  The present day picture of his father now with early onset Alzheimers created the generational book ends in the father-son relationship and we were given insights to all personalities in-between,  reminiscent of  "My Family and Other Animals"  (look it up, kids).

Read more »
Posted by Claudia Funder at 12:15 PM No comments: 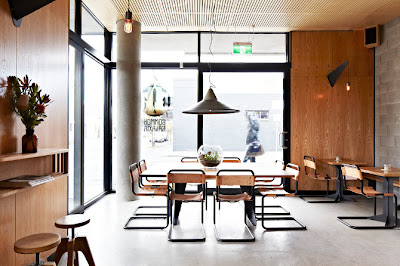 There has been much hype about newcomer to the Victoria St cafe cluster Common Galaxia, so as a long term Seddon local I thought I'd check out what the new neighbours are doing now they've had time to settle in a bit.

I admit Sunday breakfast is a hectic time to visit.  I certainly acknowledge that, but the service from the delightful staff was slow, my tepid coffee arrived with half of it in the saucer with no comment or apology and I had to call a staff member over twice to order.  Not a very good start.

It has to be said. For many of us, Christmas is in summer.   For me the first Tuesday in November is the warning bell; the beginning of summer and the gateway to Christmas.   For that is Melbourne Cup Day and the jolting reminder that the end of the year is nigh. What? already? On that warm spring night the golden light starts stretching long shadows at 8pm and I think of sparkling tinsel and fur trees.  Christmas is around the corner.

Thanks to the gold rush, Melbourne was once the largest Victorian era city, outside of London, named after Lord Melbourne in the new colony named for his Queen.  So you don't get too much more Victorian than that.  No wonder then that the full Victorian Christmas tradition transplanted over here amongst the Anglo settlers.  The tradition and the city have pretty much grown up together.

Shown in the beautiful Westgarth Cinema, to 10 or so people, getting out to the movies on a midweek afternoon was a rare, great treat.  "Cesare Deve Morire" lived up to the dramatic and powerful promises made in the advertising. It has also picked up a nice bag of accolades and awards this year including the Golden Bear from the Berlin Film Festival.

The story is based on a true occurrence of Italian prisoners putting on Shakespeares Julius Caesar.  The cast members are indeed prisoners and their quiet, awkward, rough presence is the key ingredient to the films effectiveness.

I found the crown of France in the gutter, and I picked it up.

At last I went to "Napoleon. Revolution to Empire" at the National Gallery of Victoria during the week. I must say I wasn't quite in the mood, but it was then or never so along I trotted.

Once inside, however, the exhibition stood up to the accolades it has been receiving. It was bigger than I thought it would be, with many more objects on display than previous "blockbuster" exhibitions which I generally find beautiful, but the content thinned out.  Not so here. 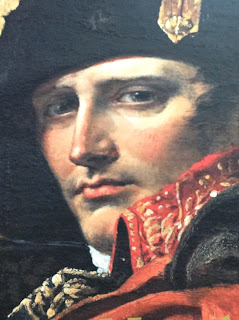 The layout and flow is good and I was able to move around easily, see the objects and works on display for either a short or longer time as suited me. The audio tour was detailed and did not repeat the information given on the text panels so the viewer got more information and diverse contexts and facts. Often I find an audio tour is a slightly more detailed version of the text panel and isn't really worth it.  It was also very easy to use, didn't jam or die and I could flit around it easily finding what I was looking for. I got tangled up in the wires and straps and would have preferred to download it to my own device which I later realised I could have done, here.


The balance of artworks and objects was wonderful. Porcelain pieces, maps, portraits, furniture, personal items, official documents, statues and armoury are just some of the media on display. This is an exhibition of historic objects and works giving a 3 dimensional comprehensive picture of Napoleon and the context of his times, his personal and professional life and the places he lived, conquered, fought and visited. 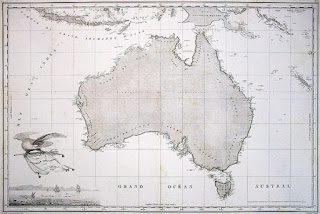 The large section on the french exploration of the pacific and the Australian coast all of a sudden gives the french history an immediacy and local connection.  It was the French publication by Charles de Brosses in 1756 that gave rise to European interest in exploring the area and fuelled French policy to explore "terre Australie" focussing on charting the coastline and scientific study.

Of course La Peruse had arrived in Botany Bay on 26th January 1788 only just after Arthur Philip and the First Fleet. He spent six weeks there, sailed on to New Caledonia and disappeared; although his maps had been sent back and survive. The exhibition also touches on the efforts of Bourganville, Dufresney and the famous race between Flinders and Louis de Freycinet in the early 1800's. 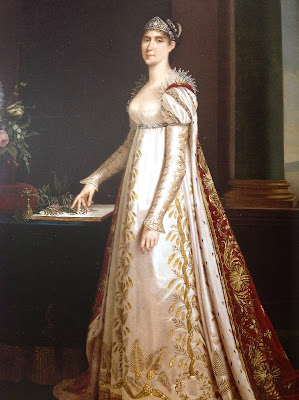 The maps of de Freycinet were the first complete maps of Australia published in 1811.  During that voyage french names had been given to much of the coast and the exhibition concentrates on the Victorian coastline, named "Terre Napoleon".  Had things turned out only slightly differently we might be speaking french like the New Caledonians and meet under the clocks at Freycinet Station.

Not leaving this chapter in isolation, the Australian theme is extended through the efforts of Josephine and her expertise and interest in exotic botany and animals. I didn't know that there were kangaroos on her estate and the beautiful botanical sketches are of plants in my back yard. I'm used to looking at Celia Rossers Banksias but not sketches of our native plants from the seventeenth century.

There is a lot to explore in the Napoleon exhibition. I suggest you read the excellent website, download the tour and get yourself to the NGV.  I think I'll be going again, perhaps in the wee small hours next weekend. 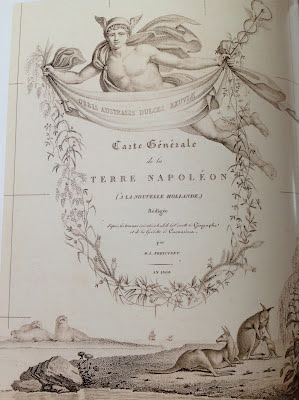 or in person at NGV International


Posted by Claudia Funder at 6:55 PM No comments: